Mouth Bacteria Could Cause Colon Cancer 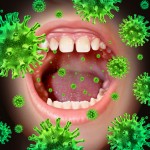 Two new studies have identified a possible link between bacteria commonly found in the mouth and cancerous tumours that form in the colon. Researchers hope that the new findings could allow doctors to identify patients who are at risk, or lead to new ways of treating the disease.

Colon Cancer is a Big Killer

According to the Canadian Cancer Society, colorectal cancer is the second most deadly cancer among Canadian men. The disease begins in the cells lining the inside of the colon, but can spread to other parts of the body as the tumour grows and cells begin to break off and travel around in the bloodstream.

Researchers at the Dana-Farber Cancer Institute in the U.S. have found that bacteria from the mouth are present in cancerous tumours in the colon. This finding suggests that the bacteria could be causing harmless growths to develop into full-blown colon cancer.

Could Oral Bacteria Be the Culprit?

The bacteria under suspicion are known as fusobacteria. This type of bacteria is found in dental plaque, which builds up on teeth unless it is carefully removed through regular brushing. As well as being a potential cause of colon cancer, fusobacteria also contribute to gum disease.

Further research at Case Western Reserve University has shown that a molecule on the surface of fusobacteria allows them to attach to colon tumour cells. The molecules then switch on genes that cause the cells to become cancerous, as well as causing inflammation which helps the tumours to grow.

These two studies pave the way for further research into the role that bacteria play in triggering and driving the growth of cancerous tumours. It is hoped that greater understanding of the causes and development of cancer will lead to new treatments and preventative measures.

Although it is too early to say whether fusobacteria are a significant cause of colon cancer, the new findings are further evidence that oral bacteria play an important role in overall health. The best way to keep the number of harmful bacteria in your mouth in check is to brush regularly to remove dental plaque and see your dentist regularly.